← back to
Chapter Music
Get fresh music recommendations delivered to your inbox every Friday.
We've updated our Terms of Use. You can review the changes here.

How Far Will You Go? 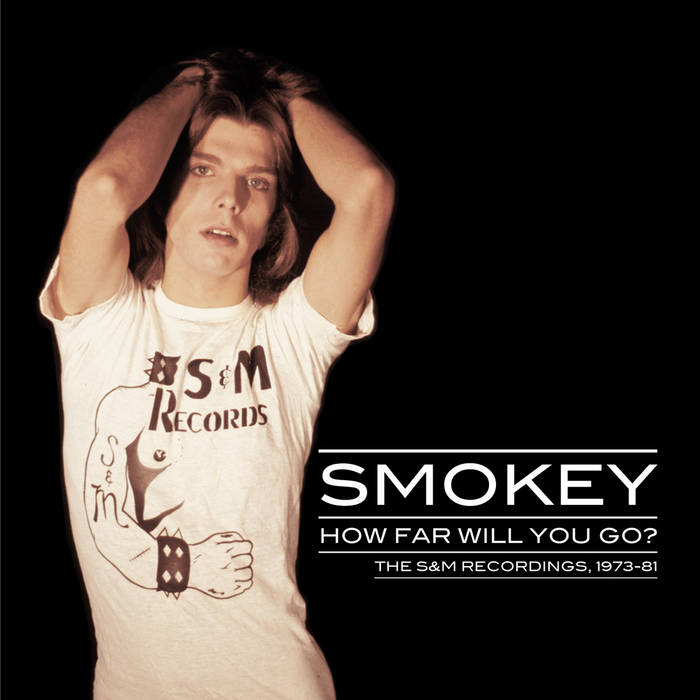 Chapter Music is excited to present the first ever reissue of wild and outlandish 1970s LA pre-punk icons Smokey. Featuring cameos from James Williamson of the Stooges, Randy Rhoads of Quiet Riot/Ozzy Osbourne and members of the Motels, King Crimson, David Bowie’s Tin Machine, Suburban Lawns and many others, the Smokey story has to be heard to be believed.
In 1973, two wide-eyed young music fans made their way to Los Angeles and were introduced by a notoriously touchy-feely road manager for the Doors. They fell into a relationship that would produce five of the most criminally neglected singles of the decade, as well as a treasure trove of unreleased recordings.
John “Smokey” Condon was a bewitchingly beautiful Baltimore transplant, himself no angel after spending his teenage years partying with the John Waters crowd. EJ Emmons was a budding record producer from New Jersey, already starting to work in small studios around Hollywood.
Condon had marched in New York the night after the Stonewall Riots in 1969, and so by the time he and EJ created Smokey, they weren’t about to hold back. Released in 1974, first single Leather b/w Miss Ray wasn’t just openly gay, it was exultantly, unapologetically gay, examining front-on the newly-liberated leather and drag scenes thriving in America’s urban centres.
The single was shopped around to labels using Emmons’ industry contacts, but doors were regularly slammed on the duo. “We can’t put this out, it’s a fucking gay record, what’s the matter with you,” said one record exec, while adding “it’s really good though.”
So Smokey formed S&M Records, with a logo featuring a muscular arm encased in studded cuffs, and “S&M” tattooed on the bulging bicep. They went on to self- release five singles that span pre-punk, stoner jams, disco, synth-punk and more, all stamped with Smokey’s fearless candour.
1976 single and compilation title track How Far Will You Go...? features guitar from EJ’s studio buddy James Williamson, fresh from his adventures recording Raw Power with Iggy & the Stooges in London with David Bowie. Smokey even remem- bers a few mid-70s jams with Williamson, with a vague view towards replacing the rehab-bound Iggy as Stooges frontman!
The live band played almost weekly at Rodney Bingenheimer‘s English Disco, with a band featuring 14 year old future Quiet Riot-ers Randy Rhoads and Kelly Garni.
Then there’s the raft of unreleased recordings, including a 9 minute disco workout entitled Piss Slave, and two versions of Million Dollar Babies, an ode to New York’s notorious trucks where men would go late at night to trick.
All-in-all, How Far Will You Go? is a revelation, lovingly restored by Emmons from original master tapes, and even mastered for vinyl by Emmons on his own cutting lathe. With extensive liner notes and photos, How Far Will You Go? tells the story of America’s greatest 70s should-have-beens, a band so amazing that the only reason you haven’t heard of them is because they were faggots, and they didn’t give a shit.

Bandcamp Daily  your guide to the world of Bandcamp